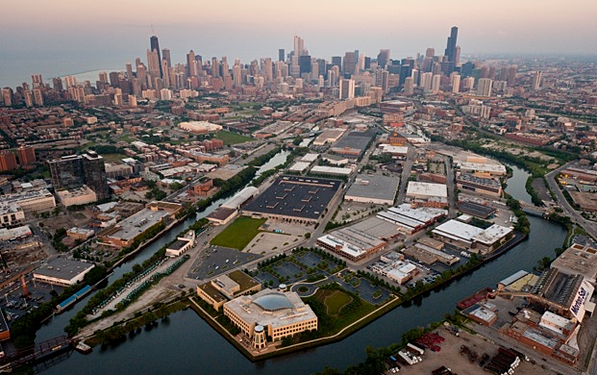 They are called different things in different cities, but they are similar in form and intent among the cities where they are found.  For simplicity’s sake, a Planned Manufacturing District (PMD), as they are called in Chicago, is an area of land, defined by zoning, that prohibits residential development and other specific uses with the intent of fostering manufacturing and blue-collar employment.

Proponent of PMDs purport to be champions of the middle-class or blue-collar workers, but fail to consider the unintended consequences of prohibiting alternative uses on that land.  At best, PMDs have little effect on changing land-use patterns where industrial is already the highest-and-best-use.  At worst, they have the long-run potential to distort the land use market, drive up the costs of housing, and prevent vibrant neighborhoods from emerging.

A Race to The Bottom

Before getting into it further, it is important to examine the economic decisions industrial firms make in comparison to other uses.  Earlier in the industrial revolution, industry was heavily reliant on access to resources.  Manufacturing and related firms were very sensitive to location.  The firms desired locations with easy access to ports, waterways, and later railways to transport raw materials coming in, and products going out.

However, the advent of the Interstate Highway System and ubiquitously socialized transportation network have made logistical costs negligible compared to other costs.  Where firms once competed for locations with access to logistical hubs and outbid other uses for land near waterways in cities, they now seek locations with the cheapest land where they can have a large, single-floor facility under one roof.  This means sizable subsidies must be combined with the artificially cheap land to attract and retain industrial employers on constrained urban sites.

Additionally, today’s economy has become much more talent-based rather than resource based, and patterns have shifted accordingly.  In contrast to industrial, residential and office uses are still very sensitive to location.  In fact, residential preference for urban locations are increasing.  Likewise, most office and other commercial firms seek to locate where they can best attract talent or customers, or simply put, convenient to residential.  To the dismay of the politicians, blue collar jobs are destined to leave cities to seek cheaper land in less desirable locations.  We should expect industrial firms to prefer exurbs and sites close to negative externalities, such as near highways and airports where noise and air pollution drive out residential uses.  Efforts to stem the tide of these realities will surely incur dead-weight losses.

In a race to the bottom, prohibition of housing and other uses in PMDs drives the value of that land down to the point it can compete on price with the most undesirable suburban locations. That is, until a non-manufacturing use compatible with the wording of PMDs emerges to crowd out industrial.

We are are in an interesting time, and are witnessing the first cases where the long-term consequences of PMDs are beginning to emerge for us to witness.

Over the past two decades, Chicago’s West Loop has become one of the most desirable neighborhoods in the City.  Developers flocked to the neighborhood to take advantage of the neighborhood’s proximity to Chicago’s Loop, and abundance of underutilized warehouses waiting to be converted to hip lofts.  However, Fulton Market and meatpacking district on the northern part of the West Loop remained immune to the radical transformation.  Neighboring West Town, River West, and West Loop blossomed during the housing boom.  Was Fulton Market less desirable?  Far from it – meaningful redevelopment was forbidden.

As developers began converting West Loop buildings in the 90’s, the Randolph Fulton Market Merchants Association proposed the formation of the Kinzie Street Industrial Corridor.  The Association ultimately triumphed in their lobbying for the district, which formed a PMD to protect them from the encroachment of competing land uses. They also won a Tax Increment Financing district to fund subsidies, and other programs aimed at enriching incumbent and new businesses in the area.

Then, along comes Google.  According to the wording of the PMD, “High Technology Office” is a permitted use in the Kinzie Street Industrial Corridor.  Google, in search of an office with large floor plates for its Chicago headquarters, chose to move into a former cold storage building in the Fulton Market that is being converted into office.

As a result of Google’s impending arrival, Fulton Market has attracted a flurry of speculative real estate investment as other technology firms, hotels, restaurants, and entertainment venues flock to the area.  Land prices have been driven up to extent that no matter how much the subsidy, Fulton Market is no longer an economically viable location for industry or manufacturing.  We should expect politicians to scramble to fight this over coming years, but extinction of Fulton Market industry is imminent.  Efforts to hamper market-forces, millions of dollars of wasted subsidies, and unnecessarily higher housing costs were sacrificed to achieve nothing of lasting value.

Possibly the biggest victim of the vast prohibition on uses of land in Planned Manufacturing Districts are the neighborhoods in which they are located.  In her treatise, The Death and Life of Great American Cities

, Jane Jacobs discusses the ingredients of what makes urban districts flourish or fail.  Jacobs makes the case that great urban districts typical have a diversity of primary uses, short blocks, diversity of the age of buildings, and sufficient concentration of people.  Districts aimed at preserving and fostering limited uses, such as PMDs, stand in the way of all of these factors necessary for the emergence of vibrant city life.

Most obviously, if residential and other uses are prohibited, a diversity of primary uses and sufficient concentration of people are impossible.  Since the optimal sites for today’s manufacturing and logistics firms are very large, single-story buildings, firms are likely to demolish older multi-story buildings otherwise desired by residential loft-lovers.  They are also prone to spread their facilities over several blocks, sometimes incorporation what was once a street into their property.

Inspired by Fulton Market’s sudden success, some developers have begun to set their sights on other well located PMDs.  These developers intend to snatch up the preserved land at artificially low prices and entice technology companies to come.  One such developer, South Street Capital intends to do just that in Goose Island, straddled between River North and Lincoln Park to the east, and River West and Wicker Park to the west.  Developers also have also been eyeing the nearby site of the former Finkl Steel Plant.

Ironically, it was Finkl who successfully lobbied for the formation of Chicago’s first PMD, the Clybourn Industrial Corridor.  In the debates leading to the formation of the PMD, light manufacturing firms and developers were opposed to protections.  Light manufacturing wanted to keep the option to sell their land to developers and move to the suburbs. As reported by the Chicago Reader:

On the other side were a handful of industrial-property owners from the area and their battery of lawyers, who argued that Eisendrath was offering them protection they do not want. Someday they may want to move, they say, because their buildings are too small, old, or obsolete. And they want the right to sell to whomever they choose–builders of shopping malls, condos, town houses, it doesn’t matter–at the highest dollar the market will bear.

“I like doing business in Chicago,” says David Schopp, chairman of U.S. Sample Company, the second-largest manufacturing employer in the area. “But I don’t want to be restricted. I don’t think it’s government’s role to say who I can and cannot sell to.”

Now, it is Finkl who wishes for that option.

The southern part of Fulton Market, as much as zoning hampers it’s potential, should enjoy some vibrancy as adjacent uses spill over into the district. (further, we do expect the city to begin allowing more residential in it’s latest plans for the district)  However, without lifting the PMDs altogether, there is little reason to be optimistic about the Goose Island and Elston Corridor PMDs.  Unfortunately, development of the PMDs in line with current prohibitions will result in a large area devoid of residential uses and other essential ingredients needed to become vibrant districts.  The area currently lacks transit alternatives, so employees will get to work by car or bike, exasperating traffic on roads connecting Lincoln Park to the expressway. We cannot expect the area to be rescued by spillover from nearby residential areas, as the river acts as a border vacuum preventing interconnection and transit access is minimal.  Failure to remove the PMD before further development takes place will condemn the area to eternal dullness.

There are a total of 15 PMDs in Chicago.  The PMDs mentioned above, in addition to the Chicago/Halstead PMD, are the PMDs that have successfully thwarted residential encroachment.  Because of their undesirable locations, the remaining PMDs are impotent at altering land use patterns.  Impotent PMDs only serve as a mechanism for politicians to pay lip service to manufacturing jobs, and window dressing that goes hand-in-hand with subsidies.

I often hear urbanists defend PMDs, repeating the Urban[ism] Legend that we need them to keep manufacturing jobs in the city.  We urbanists can do much to make these districts vibrant if we overcome our nostalgia for urban manufacturing and come to terms with how dangerous PMDs actually are.  Economically speaking, PMDs can only serve the purpose of keeping land prices low enough to compete with undesirable suburban locations for industry. PMDs nonetheless do little to overcome the enormous economic forces repelling industry out from desirable locations in cities.  At worst, PMDs permanently plan the life out of otherwise desirable areas in the long run after serving their purpose temporarily.  At best, PMDs are impotent to drive down land prices in already undesirable places any further than they already are.

At a time when housing affordability is a major issue affecting cities, one way to remove barriers to increased housing supply is to abandon our counter-productive nostalgia for urban manufacturing.  PMDs abolish urban vibrancy, and it’s time for cities to abolish PMDs before it’s too late.

Adam is passionate about urbanism, and founded this site in 2007, after realizing that classical liberals and urbanists actually share many objectives, despite being at odds in many spheres of the intellectual discussion. His mission is to improve the urban experience, and overcome obstacles that prevent aspiring city dwellers from living where they want. http://www.marketurbanism.com/adam-hengels/